I’m nothing if not resourceful. Like for reals. I really do take great pride in my ability to do a lot with very little.

So I’ve successfully set up shop (or Tulle Shoppe if you’re nasty) along a single wall in our guest room. I’m so happy to finally have a space, even if it’s super limited. I’ve tried hard to make the space function as an inspiring creative space and a relaxing guest room which is sometimes occupied for months at a time. Not all ideas translated so well: this raspberry duvet — WTF was I thinking? But it’s actually a lot harder than I thought especially with the current budget for this project which is zero dollars.

As I’ve already said, I’m resourceful. After taking inventory of all the tulles (misc. craft supplies) I already have and armed with a 50% off coupon and gift card  for Michaels I headed out. BTW – I make it a habit of asking for these when people ask what I would like for my birthday or when they are looking to reward me for the nice thing I did for them. Not that I do nice things expecting a return, but if I’m asked, why not? That way in times like this, when I really can’t justify spending I can still go shopping. Ghetto Baller Status.

For $3.50 I came home with a two pack of 8*10 Canvas — SCORE! Inspired by this Pinterest Board I decided I wanted to create some word art to deck my walls. 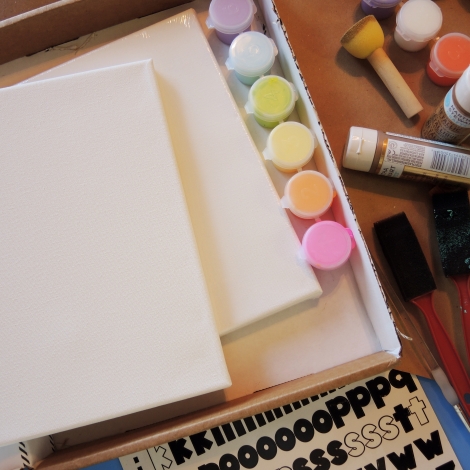 I had everything in the picture above including the round sponge dabber, which proved to be essential for this project. I would highly recommend one. Before starting I selected the saying I wanted to have on the canvas. I also made sure that I had all the letters that I needed to spell it out. That step was necessary because I was using  a sheet of adhesive letters that I already had. If you buy new you won’t need to worry about that.

Once I knew the phrase and was sure I had the letters, I mapped it out. Again to save money I was using materials I already had if I were buying specifically for this project I would have chosen different letters. But because I was making it work with what I had I decided to do part of the phrase in these letters and then another part in another set of adhesive letters to add a little more dimension and texture. You’ll see in the final project below. 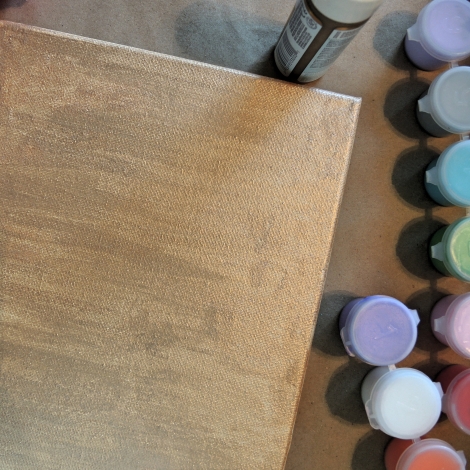 I knew I wanted the letters to be gold so I painted the entire canvas gold with an acrylic craft paint. This layer actually came out quite lovely, even if it’s hard  to see in this photo.

Next I laid out the letters arranging them carefully on to the canvas. The instructions recommended waiting for the paint to dry between layers but I didn’t wait and it came out just fine.  But I can definitely see where waiting would have been a good idea.

Once the phrase had been placed on the canvas I covered the whole thing in a second layer of paint in a different color. This is where the circle dabber sponge came in handy. I’m not sure if it was because the paint wasn’t dry or the adhesive letters were old but the adhesive was a little loose. If I’d used a regular brush stroke the letters would have moved. With the dabber I could just saturate the brush in paint and I carefully dabbed the letters until I reached the desired coverage.

I removed the letters as soon as I was done painting the layer. I was worried that once the paint was dry it would peel. I love that the gold from the first layer peaks through. It looks a little brownish here but it’s gold and it looks so good. I painted the other letters in a contrasting color, again, starting with a gold layer. I also left a little more of the gold layer exposed on the larger letters.

Ta-da! Show up for your dreams ya’ll. They need us to fight for them. But also don’t go bankrupt on the way up. For $3.50 I’m really happy with how it came out.

The canvas came in a 2-pack so I’ve got one more to paint, what inspiration phase would you put on it?